Throughout my life I have had the privilege to surf and travel to a lot of different countries around the world.  There are very few places that I have traveled twice to, or even considered trying to go back, since we are always excited about finding somewhere new.  Costa Rica is one of those countries that I love to revisit.  There is something about Central America in general that I just cannot get enough of, but Costa Rica more than other places leaves me with that burning desire to return.

Maybe it’s the abnormal level of tranquility and quiet, which is completely opposite of everyday life here in Southern California.  Maybe it’s because for two weeks I don’t have to drive a car, and can have a beer after a morning paddle out. It might be the appropriate siesta after stuffing my face with fresh pineapple.  Whatever it is, I recommend all of you to visit Central America, and Costa Rica specifically.  It is one of the most economic (for your wallet) and fun trips you can take without spending too much time traveling in the air.

I’ve been twice on my own with some buddies to Costa Rica.  Once to the north end to Playa Grande and Tamarindo, and more recently to Playa Hermosa and Jaco last August, which is closer to the capital.  If you’re looking for a low-key destination that has world-class surf, Playa Hermosa is your next trip.  Travel was relatively easy from the capital San Jose out to the coast (an hour cab), and if your minimalistic like me, there are a handful of restaurants in walking distance that can deliver on quality seafood and other dishes.  Traveling out in the Jungle can occupy a lot of time, but fun if you're looking for an adventure. When we first landed in Costa Rica in the morning, our first official stop (after the beer run and to get a gallon of water for yours truly) was the Tarcoles River.  It was on our way out of the capital, around the mountains and into the beach area of Jaco and Playa Hermosa, and is known for its ridiculous quantities of Crocodiles lounging around.  The viewpoint takes place from above on a bridge, but you can also do river tours that are family friendly.  When we showed up, the water was sort of murky, but when you focus your eyes down on the water and really take a good look, crocodile heads were EVERYWHERE swimming around. If we were not suspended up on the bridge overlooking the river and in the water, I would have been deathly terrified.  I grew up in the sharky waters of Northern California, but Crocodiles are a whole different ball game.  They are super fascinating to see out in the wild, but I’m cool with keeping my distance.

Ok, now back to the surf trip. When traveling for a surf trip, you have a few choices; you can pack your own boards and depending on the airline you choose, will pay about $250 in fees to get them there and back (assuming you don’t break them).  Your other option is to rent or to order local custom boards to be ready by the time you arrive.  If you’re in the Jaco area and came without a D33 board, hit up my friend Carton Villalobos of Carton Surfboards. Throw my name out there and he will set you up with anything you need and maybe even drive you out to a couple secret spots ;)  You will need to give him about a 4 week notice if you want to do a custom board.

Typically the wave in Playa Hermosa is fast and hollow, so bring something with comparable rocker.  If you’re more of a beginner surfer and are afraid of size (it averages 4-8 feet in the summer months), there are plenty of softer and mellower breaks out back towards Jaco to surf.  There are even tents along the beach that will provide surf lessons to those who are just learning.

Playa Hermosa is all beach break, so you don’t have to worry about crashing onto a reef if you bail out, but be mindful that these waves pack a punch.  Overhead Costa Rica is much gnarlier than what we’re used to in Socal.

In the strip of beach of Playa Hermosa, look for the huge lone tree along the beach like in the picture.  That’s the main break and where you will find most of the surfers, but there are plenty of other peaks north and south of the tree if you want to just surf by yourself.  We stayed in the Hermosa Bungalows which were just due south of the tree. The closest restaurant to our bungalows was Vista Hermosa.  It featured an open-air restaurant with a big screen TV displaying surf movies, and an outdoors eating area that overlooked the beach.  I tried to eat here the most, mainly because of its laid-back vibe and delicious seafood and smoothies.  If you’re feeling daring, the Octopus Poke Bowl was my absolute favorite dish while on the trip.  I think I ate it at least 3 or 4 times.  Packed with Octopus, Avocado, Sesame Seeds, Shallots on top of a large portion of rice, this was what I craved after almost every surf session. Directly next to Vista Hermosa was the Backyard Bar.  This place was really good for breakfast, you could get your classic eggs and bacon and potatoes, or you could go for the Tico Breakfast, which came with eggs, rice & beans.  Reasonably priced at under 4 dollars, this will fill you up before paddling out along with a coffee.  There is also a surf competition right behind the Backyard Bar at 4pm every Saturday that features some of the best surfers in the area, a good place to watch and grab a beer. When we stayed in Playa Hermosa, to do anything like get groceries, or run to the ATM for cash, you needed to get back into the town of Jaco, which is only a few miles north up the road, but you will need a cab.  Playa Hermosa is a little bit more secluded and has a handful of restaurants, but your resources will have to come from Jaco if you're planning on stocking a fridge with beer and food.

For me personally, Jaco wasn’t quite my scene.  It apparently is well known for its nightlife.  I’ve heard that Monkey Bar is the go-to spot, I’m hard of hearing enough as it is.  When you throw thumping dance music in the background, I’m pretty much useless for a conversation and head for the bar or for the patio.  My dance skills are not quite up to par. I’ll be down the road in quiet Playa Hermosa, either at the beach or the pool at the Bungalows, where you can find the waves and solitude.  Costa Rica provides such a good escape from the hectic day-to-day we deal with in California, that sometimes just relaxing provides great value. And I’m OK with that.  Scoring barrels with friends and catching up is enough for me. 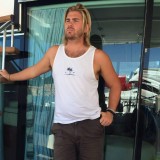 I’ll need to head up to Hermosa soon! I tend to stay away from Jaco because there’s a lot of prostitution in that area. I live just outside of Tamarindo in Playa Langosta for 3-6 months out of every year and LOVE it here. The true Pura Vida lifestyle. I’ll need to take a week or two trip to Hermosa to see some of the spots though!
-Chris